From star of the stage to star of the SoulCycle studio. Lauren Naomi, one of SoulCycle’s top London instructors, shares her story with Kate Cracknell
Download PDF
Read Issue

What’s your background?
My background is in musical theatre. I went to the BRIT School for years 10–13, which is when I started to perform. I focused on dance, which I’ve always loved, with a bit of singing on the side. That was followed by a three-year musical theatre degree at the Urdang Academy in Angel, north London.

And then, five years ago when I graduated, I was suddenly out into the big wide world of performing. In fact, my first gig was a TV ad for KFC, but as a dancer/singer I was always aiming for the big West End shows. I kept getting close but would never quite land the role – not until I changed agent. My first audition after that, for Hairspray, I got the job. We toured the UK for 10 months starting April 2017.

I learned a lot about myself on that tour: I felt I found my voice. And I absolutely loved the whole experience. I knew it was what I wanted to be doing.

So, how did indoor cycling come into the mix?
One of the things I loved about Hairspray was the buzz of being on-stage. The adrenalin, the sweatiness, the excitement of being part of a big cast. When the tour finished and I didn’t have another show to go into, I started looking for something else that would give me that same feeling.

Some days I’ll feel like I’m Oprah. Other days I have to let the music speak for me!

I decided to train as a fitness instructor, and then I did a group cycling qualification too. I’ve always loved cycling classes: they can be tough, but if you find an instructor who’s on your wavelength, who chooses music that resonates with you, if you’re in a room full of people whose energy you can feed off… I love it. Especially the music. It’s 100 per cent about the music for me.

Once I’d done that qualification, I sent my CV to Core Collective and ended up joining its team in South Kensington, as a cycling instructor. I worked with some great people there, learning from them, finding my vibe, building up my community.

How did you juggle this alongside your musical theatre commitments?
At the end of July 2018, I started a three-month run in Eugenius! The Musical. It was off the West End, but right around the corner from Wicked in the Victoria area of London. It felt like I was getting closer to my dream.

Eugenius was eight shows a week, and I was also doing five classes a week at Core Collective. I’d get home from the show at 11.00pm and then, Saturday morning, I’d have classes at 9.00am and 10.00am. But I love to be busy, so that was fine!

In a way, being a cycling instructor… it’s like having my own show

I carried on doing classes at Core Collective throughout the three months of the show and beyond, but I was also doing auditions for the West End, and this time I was getting so close. I got into the final casting round for Book of Mormon, 9–5 The Musical, Tina the Musical… I had four potential roles and my agent was so convinced I would get one of them – but then it didn’t happen. I didn’t get any of them.

It was devastating. Heartbreaking. My confidence was knocked and I started to question my goals in life. If I’m honest, I’m still trying to decide if I want to keep trying for the West End – I’ve certainly taken a break from auditioning for now.

It’s hard to stop when it’s something I’ve trained so hard for, when it’s always been my dream. But equally, I’m learning to accept that it’s OK if my dream has changed. And in a way, being a cycling instructor – it’s like having my own show. I’m on a podium, in the spotlight, and it’s up to me to capture and hold the attention of the 65 people in the room. I have to perform. 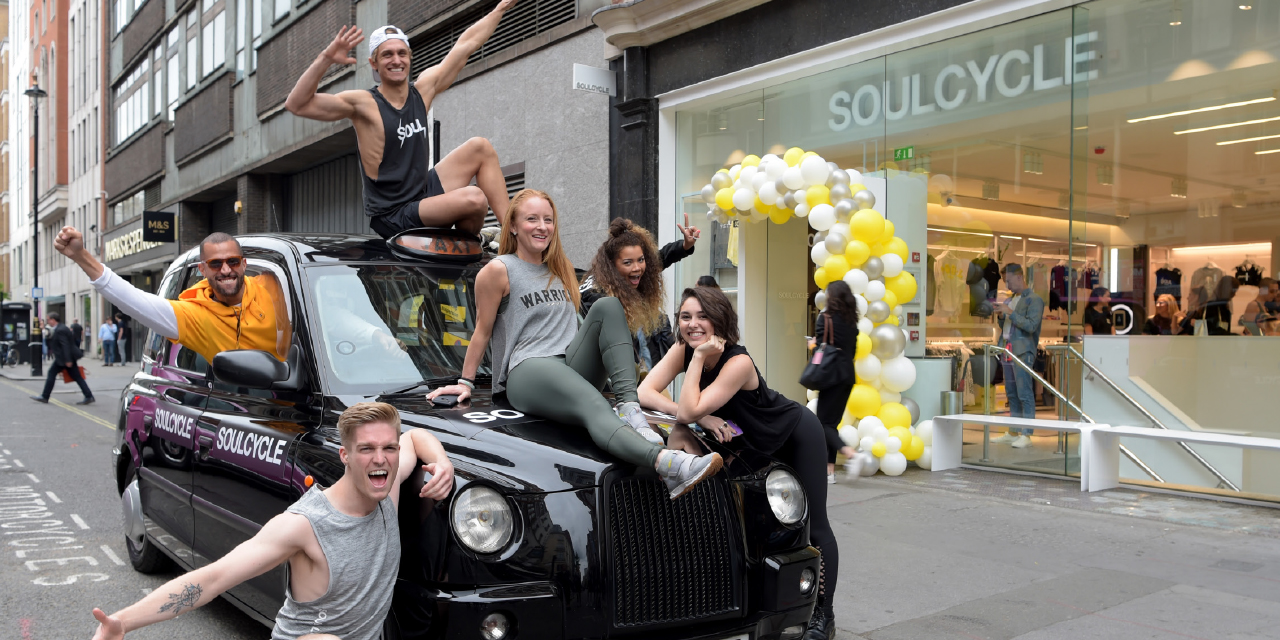 You’re now an instructor for SoulCycle London. When did that happen?
It was when SoulCycle was getting ready to launch its first UK studio in the Soho area of London. There was an audition of course, but honestly, after my experiences in the West End – all those blunt rejections – everything about SoulCycle felt so positive. The compassion I was shown even during the audition… it just felt totally different. And it felt right.

I ended up being offered one of the three UK instructor roles and I absolutely love it.

What sort of coaching did SoulCycle give you?
I was part of the first UK team to train as SoulCycle instructors, ready for the Soho launch last summer. As the first team, we would become the faces of SoulCycle in the UK, representing the brand and helping to build its name in a new market.

We were flown out to New York for training, which was a fascinating process. SoulCycle talks about it as peeling back the layers. They challenge you to keep digging, to keep peeling back the layers, to explore who you are. And then you’re put back together again, still true to yourself but everso slightly different, able to hold yourself a bit prouder.

As part of that process, I learned how to open up to the class, talking about my life: friendships, relationships, something interesting I might have heard in a podcast… SoulCycle is absolutely about soul. You’re there to be yourself, to bare your soul. It’s the SoulCycle way to be more personal in class than at other places.

During class, I’ll talk about my mum, my cat, what happened to me on the bus that morning. You’re encouraged to be yourself – and people do respond to personal stories. You start chatting and their heads go up.

I found it difficult at first – I had never talked about my feelings as openly as perhaps instructors in the US had – and even now, I don’t always find it easy. Some days I’ll feel like I’m Oprah. Other days I have to let the music speak for me!

What would you say is your style of instructing?
I’m both strong and soft. I want people to work hard, but equally I make it clear you don’t always have to be perfect, and that ‘working hard’ looks different for everyone. Whatever you’re able to give to the class on any given day, that’s enough. Don’t compare yourself to the person next to you. Just know how you feel in your own body.

I read the room, making it challenging for all levels but also accessible to everyone who’s in there with me. In the end, I just want people to walk out at the end of class feeling proud of themselves, feeling stronger as a person. Our mission is to move people to move the world.

I also make sure I put myself out there, absolutely every class. People think what we do is easy, but it isn’t. It’s blood, sweat and tears. You have to make others feel good even if you’re having a bad day. If you show up for your community, giving your all every time, they will show up for you.

I’ve evolved so much as an instructor during my time at SoulCycle. I’ve become far more confident, both in my instructing skills and in my own skin. I’ve learned to take the space, to be true to myself, to put myself out there every time and not apologise for what I do. And that’s what I encourage in my community too. I want more for myself and I want more for them.

What does your role at SoulCycle involve?
Before lockdown, I was doing 11 classes a week: six at Soho and five at Notting Hill, SoulCycle’s second London studio which launched in November last year.

I’m now back instructing at both of those locations and am keen to continue working across different SoulCycle studios as the portfolio grows: I’m hoping to get up to 12 or 13 classes a week when our next London studio opens.

There’s a lot of prep work: we’re not just instructors, we’re curators of the experience

In between the classes, there’s a lot of prep work. We’re not just instructors, we’re ‘curators of the experience’, and the experience we curate is unique to each of us, driven by the energy we give out, the moves we do, the music we choose.

Music is one of the most important aspects of a SoulCycle class: we create different playlists for different classes, which also means different choreography for each class. As you can imagine, then, we all spend a lot of time looking for new tracks and remixes: you can be deep-diving for six hours and only find three tracks! But you might find a track you think would suit the teaching style of someone else in the SoulCycle community; we all send songs to each other.

How does Notting Hill compare to Soho?
Again, I’m looking back to pre-COVID here, but Notting Hill was always very different from Soho and a great learning curve.

Soho always had the passing trade, with lots of offices nearby and tourists walking past the studio and trying a class. Notting Hill is very residential, so I had to build a community from the ground up.

Some classes I had to work really hard to do that. I did things like themed rides, for example, and I worked hard to understand the nuances of the market to get my music choices right. One class, on a Thursday lunchtime, I started doing Soul + Abs: 15 minutes of ab work at the end of the class, for free. Lululemon gave me some mats for the foyer area – as of February this year, I’m also a Lululemon ambassador – and we made the space look really professional. 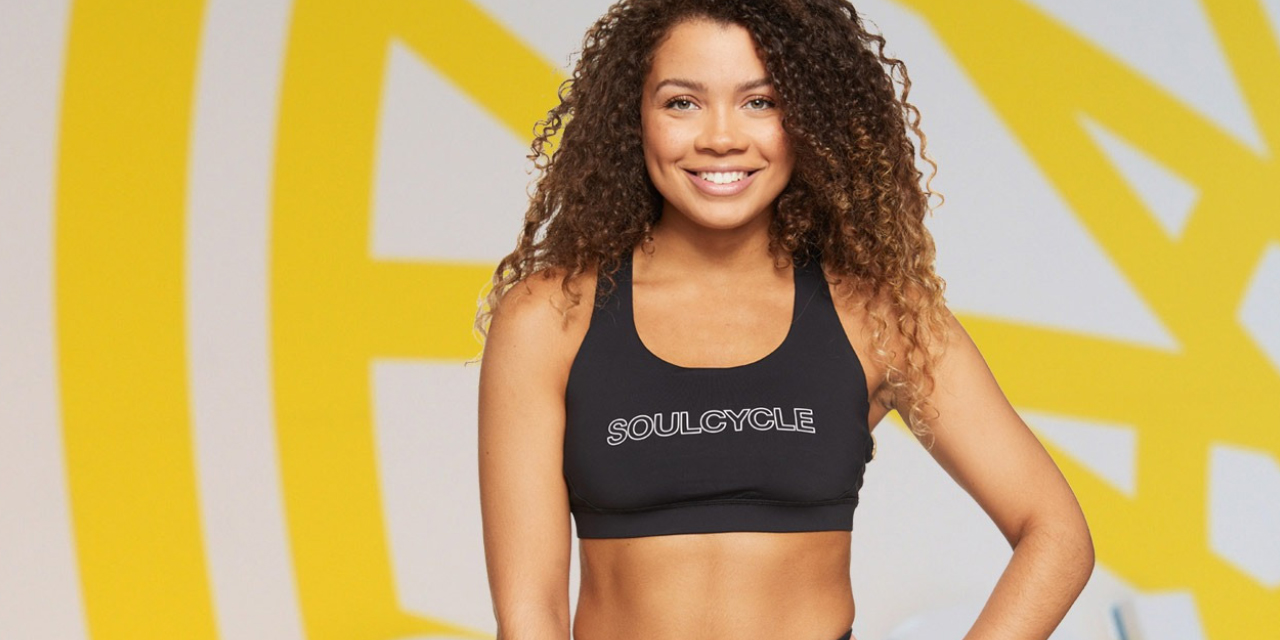 As an influencer, do you run any online fitness programmes?
I started doing an Arms & Abs series when COVID-19 put us all into lockdown, going live on Instagram at 1.00pm every day. But at that point, everyone was doing the same. In the loveliest way possible, social media became a bit over-saturated with fitness content, and as a freelancer – hoping for a few donations where possible – it was hard to compete, especially when some of the big studios were putting content out there for free.

I’ve had people complain or leave early. That’s OK. You can’t be everyone’s cup of tea

Plus, I actually find it quite hard to create good fitness content through Instagram. For me, it’s all about feeding off the vibe of the room and the people in my class. I’ll see someone in the back row trying to keep up, or I’ll see someone upfront really pushing hard, and I’ll respond to that. On Instagram, it’s just you and a camera. You get nothing back other than the occasional emoji. As a result, I find I struggle to deliver in quite the same way.

What would you say is the secret of your success?
Being myself. Being open to new opportunities. Not being stubborn – not sticking to plan A if a great plan B comes along. After all, all of this has happened in just five years since I left the Academy. I think that’s because I always try and look at things with a “what have I got to lose?” attitude.

What advice would you give to other cycling instructors?
You can’t please everyone. I’ve had people complain, leave class early, not like my music choices. That’s OK – you can’t be everyone’s cup of tea.