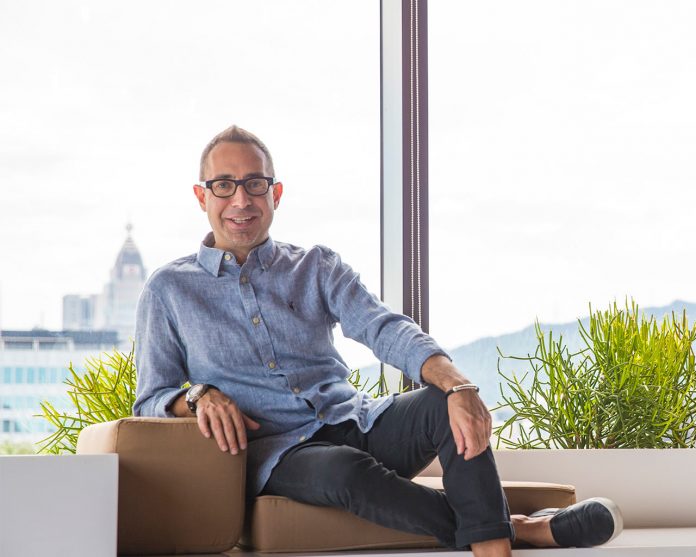 Space Cycle, the cycling boutique that’s redefining millennial fitness in Asia, is eyeing expansion across the major cities of China – and beyond, through new strategic partnerships. Its founder talks to Kate Cracknell.

You were previously president of EMI Music in Asia. How did you come to develop Space Cycle?
I was in the music industry in my 30s and it was a high-pressure environment: I looked after 18 markets, so I’d be travelling to three or four countries in a week, overseeing almost 40 different companies and thousands of employees.

I used to run as a form of stress release, but it was taking its toll on my knees. I knew I needed to look at my health in a new and different way, so I started to do yoga.

My idea at that point was to do something entrepreneurial in the world of wellbeing for the next phase of my career – but in fact, in 2002, I retired briefly, moving to Hawaii for a couple of years. During that time, I really flipped my lifestyle around to focus on wellness.

I then returned to Asia with the aim of opening a chain of top yoga studios in Taiwan and developing the next generation of yoga teachers in the Chinese market. The result was Space Yoga – the first brand within the Space Concepts family – with the first studio opening in Taipei in 2005.

How has the business evolved since then?
We now have seven studios in Taiwan and China, including one – our fourth in China – that we’re opening as we speak.

Our studios are now all multi-modality, with yoga, barre, cycling, dance and HIIT all sitting under the Space Concepts umbrella; Space Cycle launched in Taiwan in June 2015 and China in June 2016.

What unites all of these disciplines is our over-arching ambition to be an entertainment lifestyle brand that’s focused around fitness – one that’s driven by music and live classes. This is encapsulated in our slogan: ‘Moved by Music’.

Tell us more about the role of music in your studios…
When I first founded Space Yoga, in spite of my background in music, I hadn’t really focused on the link between music and exercise. That changed about four and a half years ago when I started working out in some of the boutiques that were coming into the market.

I found the experience at these boutiques far more spiritual and social – and with it more motivating – than training at normal gyms. In part that was down to the instructors, but it was also down to the way they used music. I found it stayed with me for days afterwards, especially the tracks from the peaks of the workout when I was pushing myself really hard. I think it’s the vulnerability in you at that moment that makes you particularly receptive to the sensory experience of music. 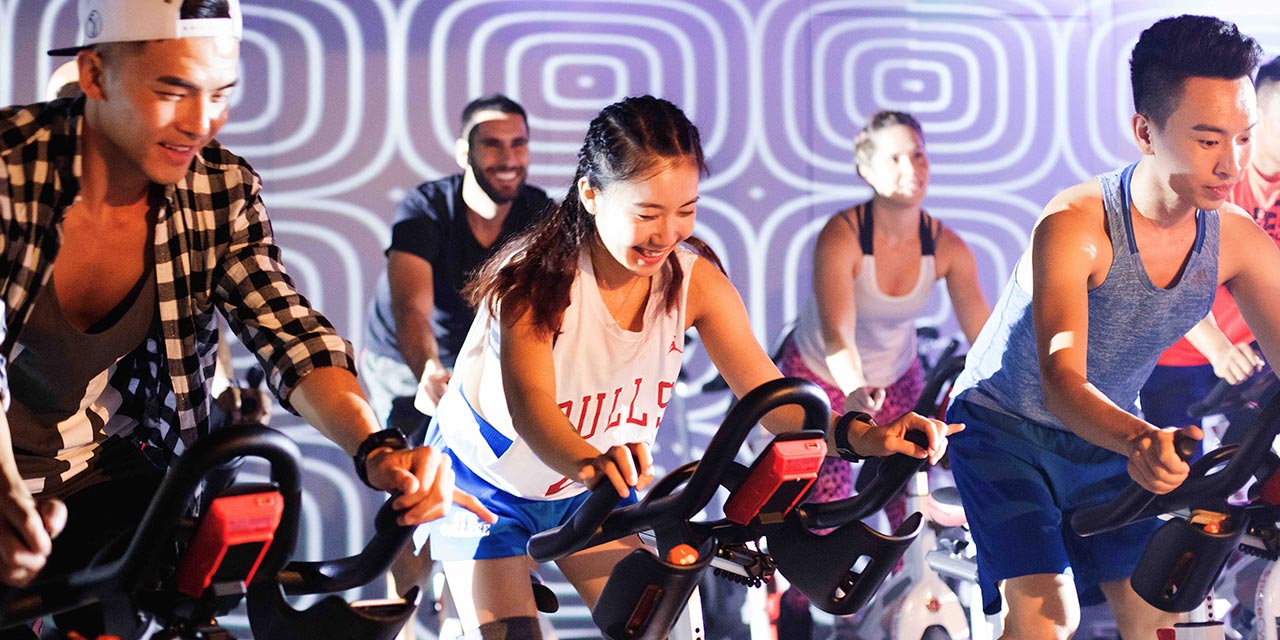 I therefore decided to expand our group exercise model with music at the heart of things; our studios are now a place where music and lifestyle meet fitness. We have a music curation department, DJs, live events, influencer and celebrity playlists… And those playlists are not only used in our studios, but can also be download from the leading online streaming services – QQ Music in China and KKBox in Taiwan – which further extends the reach of our brand.

We also aim to introduce people to new music all the time. The repertoire of what we listen to can often be quite limited; we work out what we like by about college age and then we stop exploring new artists. But music is so powerful – it can change your mood in a moment – and we want to encourage people to keep finding new inspiration. So we use our playlists to expose people to new music in much the same way as radio stations used to do. We showcase music in the context of health and wellness.

Once our customers find an instructor they respect, they’re open to that instructor introducing them to new music through their workout playlists – and this, in turn, enhances their experience with us.

This is a whole new way of reaching the millennial market, where the social aspect is the glue and the music is our means to communicate with them.

Tell us more about your celebrity playlists…
Our instructors are themselves often influencers – we work with them to build strong social media profiles – so people are keen to download their playlists, and we regularly work with
celebrities too.

For example, if a band has released a new album, we might link up with their record label to hold an event at Space Cycle. We’ll play their music, have exclusive rights to some video footage, we’ll have signed merchandise, and the record label will promote it to the fans. We might then film the event and post it on fan sites, and we’ll make the playlist available on our partner digital music services, so we become a downstream partner for the launch. It’s a new generation of online-to-offline model and it brings a whole new audience into our studios. 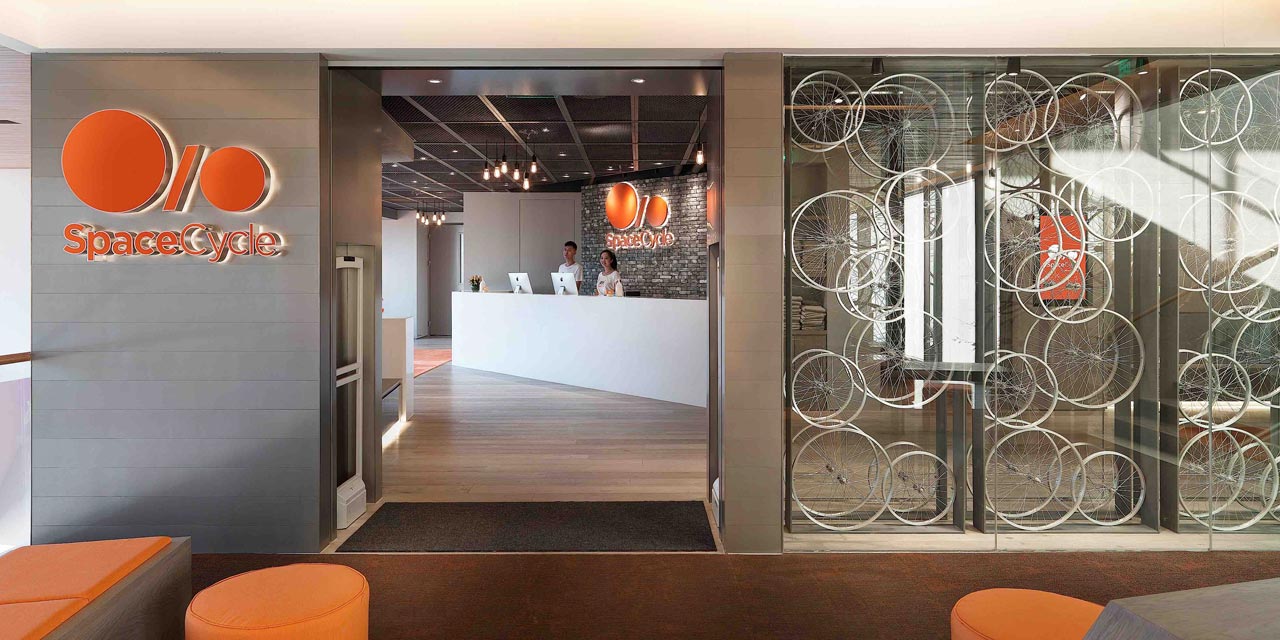 We also work with most of the entertainment companies in China to host their fan-based events: we did the main launches last year for Arianna Grande, OneRepublic, Maroon 5, the Fast & Furious 8 soundtrack… We had Linkin Park come into the studio through our partnership with Mercedes and create a playlist for us. And we take our experiences out of the clubs too: we partnered with Storm Music Festival, for example. It’s important that our brand isn’t only experienced in our studios.

We also have connections in the sports world – the likes of Nike and Lululemon – so we’ve had some of the top Chinese sports stars, such as tennis star Li Na, in our studios to host events. We had Apple CEO Tim Cook visit Space as part of the global Apple Watch launch, to promote its new features. And we have Daniel Wu Yan-Zu, who stars in the American TV series Into the Badlands, as one of our investors.

So we work with a huge number of celebrities: we’ve done 300+ celebrity events since we first launched Space Cycle. People see it as
the perfect space to showcase their own
creative endeavours.

You mention Space Cycle specifically in the context of these events. Why is that?
Indoor cycling is the closest you can get to a live concert experience. With the instructor up on stage it’s all about performance, it’s participatory, it’s focused on music, there’s a buzz in the studio with around 50 bikes.

This is really my motivation: I want people to feel as though they’ve been transported into a concert. We have technology in the studios to control the music and the lighting, and there’s no distortion of sound. It’s a full entertainment experience at a higher level than anything I’ve seen in any other boutique studio around the world.

But crucially, our focus on music doesn’t come at the expense of our fitness programming: it’s important to us that we teach at the highest level. To this end, all our instructors are trained by us – but they do then have a fair amount of freedom in their choreography. We want to give them a chance to rise to the occasion.

What’s happening in the Chinese fitness market generally?
The penetration rate is currently low, but the market is growing very quickly. People in the larger cities are becoming more focused on
preventative health and are increasingly willing to spend a portion of their income on that – our classes cost around US$22–25 in China and just under US$20 in Taiwan.

This is also a society in which people are very driven by the desire to share their experiences on social media. Indeed, China is so connected online that its ability to share and grow trends – something that’s powerfully connected to
millennial social media behaviour – means it will go through this cycle at a much faster rate than most countries.

We’re already seeing huge growth of the fitness sector in Tier 1 and Tier 2 cities – Tier 1 being those with between 10 and 30 million people, so Beijing, Shanghai, Guangzhou, Shenzhen, Hangzhou and Chengdu, and then with Tier 2 as well you get up to about 20 cities.

We’re currently seeing the massive scaling of mass market models similar to Anytime Fitness and 24Hour Fitness. These will grow first, rolling out across second, third, fourth tier cities. But after that we’ll see online fitness and the boutiques come to the fore, with consolidation of the big boxes giving way to more segmentation of the market, just as we’ve seen in markets like the US.

I expect all of this segmentation to happen within 24–36 months: China will catch up faster than any other developed society in the history of boutique fitness.

What are your expansion plans?
We recently secured US$15m in funding, in an investment round led by Chinese internet giant Alibaba, and now plan to open 50 new studios in China and Taiwan over the next five years. We’ll focus on the Tier 1 and Tier 2 cities in China, as well as Taipei.

We’ll be opening different sizes of studio depending on the location – 1,300–1,500sq m flagships, 600–800sq m hubs and 200–400sq m ‘spokes’ – and some might not have all modalities, but all will be multi-modality rather than single discipline.

WE WANT TO SHOWCASE MUSIC, ENTERTAINMENT & CREATIVITY, WITHOUT SACRIFICING THE SCIENCE BEHIND THE FITNESS

We’re also working with GOCO Hospitality to extend the appeal of the destination spa model, adding a new dimension to the urban wellness centres it’s looking to develop by incorporating ‘Moved by Music’ studios.

Finally, we’re keen to expand into other markets outside of China and Taiwan via strategic partnerships. We’re open to new ways of doing this, but essentially, we’re looking for local partners with the scale to execute our model. They will then be able to plug in to a lot of what we do already: the design, music, celebrity connections, instructor training and so on can come from us. So, we’re open to approaches from prospective partners who want to work with us to bring Space Concepts to their market.

If you look forward five years, where do you see the business?
We’ll continue to explore new modalities, we’ll open new locations and we’ll focus on expanding our presence via online platforms and content. But ultimately, we want to remain highly innovative, reinforcing our role as a lifestyle influencer and not a fitness studio. We want to be another outlet to showcase music and entertainment and creativity, and we’ll keep looking at how we do this without sacrificing the science behind the fitness.