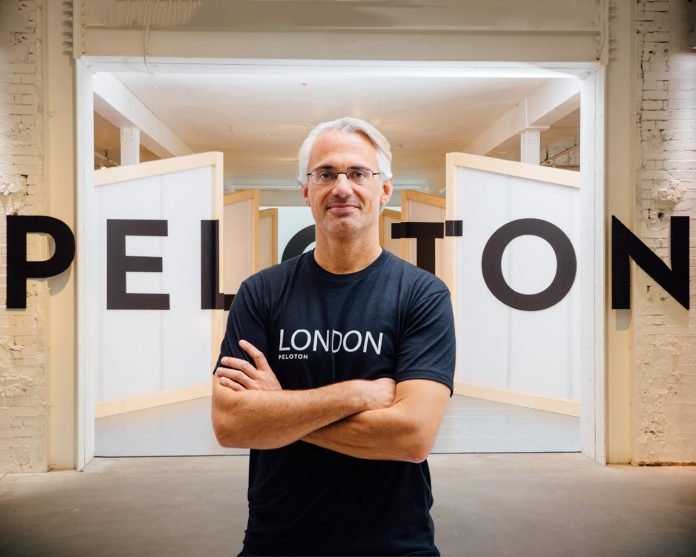 Everyone’s talking about Peloton: the brand whose powerful combination of at-home bike and live-streamed classes has taken the fitness sector by storm. But what’s its secret, and what happens next? Kevin Cornils, Managing Director International for Peloton, speaks to Kate Cracknell

What’s Peloton’s vision?
The inspiration behind Peloton is simple: people want to work out, but there are a lot of obstacles that stand in the way.

Peloton CEO John Foley experienced this first-hand when, with two kids at home, he and his wife Jill could no longer fit studio classes into their busy schedules. The idea for Peloton was born: studio-style, group fitness classes at home, letting people access the motivation, power and intensity of these classes any time, anywhere.

Peloton started with a bike, but it never set out to be just a bike company. It was always about bringing instructor-led group fitness classes to the convenience of your own home. Over the years, we’ve expanded and we continue to evolve our offering, but those founding principles remain the same.

Peloton has set the home fitness market alight. Why do you think this is?
The secret of Peloton’s success is that it’s more than just a class, a cycling studio or a bike: it sits at the intersection of fitness, technology and media and has reinvented the way people work out.

We talk about Peloton as a category of one; while there are similarities with brands that offer indoor cycling, we are more than any single bike, cycling class or studio.

The live component and community are what truly set us apart. We have over one million members in the Peloton community so, alongside the motivation from our instructors, our members can also give each other a boost.

The Peloton Bike features a real-time leaderboard, allowing you to track your progress versus other riders as well as your own Personal Record. In addition, we have a feature called ‘Here Now’, where the leaderboard shows other members who are riding in the same on-demand class at the same time as you; you can then give each other virtual high fives and support.

Other social features include ‘Ride with Friends’. When you hop on your Bike, you’ll receive a notification on-screen if a member you follow is currently taking a class. That way, you can join in and ride together on the leaderboard.

In short, members develop incredible relationships and connections with the community, who all share a passion for our brand. The way they motivate and interact with each other on the lea-derboard and on social media is truly amazing – and it converts riders into workout addicts

The Peloton Bike has a fairly high price point. Who is your target market?
Peloton has a very diverse member community, both geographically and socio-economically. What unites them is their desire for a high-quality workout with a great instructor and motivation.

They are often time-poor, so appreciate the convenience of Peloton. In addition, the monthly subscription fee is charged per household, so if you have more than one person working out, that’s a shared cost: you can have multiple profiles and riders for a single Bike.

In the UK, our monthly subscription is £39. With an average of 13 rides a month per subscription, that works out to be only £3 per ride.

During the live classes, instructors can see who’s taking part in their class, as well as those who are celebrating a milestone such as a 100th ride or a birthday, which enables them to give shout-outs to home riders.

However, it’s not just about interaction between instructors and members, but between members too. Members who have connected via Peloton will often plan to ride together and will motivate one another during the class.

Every single class that’s live streamed is then automatically added to our on-demand library, so members have access to the content any time, anywhere, regardless of where they’re based in the world.

You also have class participants in the New York studio. Can anyone go to these classes?
Anyone can visit our cycling studio in New York City to try a class. Often, we find that existing Peloton members will visit the studio to celebrate a milestone ride or to meet up with other members they’ve met through the class leader-board or social media.

We always recommend that members and new visitors to the studio book their preferred class as far in advance as possible (schedules are released a week ahead) but, with up to 14 classes live streamed each day, there are plenty of options. In addition, rides outside of the peak morning and evening times operate on a free, walk-in basis.

You now have a treadmill product too. What are your plans for this?
We announced our second hardware product, the Peloton Tread, at CES in January 2018 and started delivering units in the US this past fall.

WE ANNOUNCED OUR SECOND HARDWARE PRODUCT, THE PELOTON TREAD, IN 2018; THE REACTION HAS BEEN INCREDIBLE

Similar to the Bike, the Peloton Tread allows people to take live and on-demand group fitness classes, led by world-class instructors, from the comfort and convenience of their own homes. Peloton currently has a team of 11 Tread instructors who teach total body circuit training, walking, running, strength, stretching and audio-only outdoor running.

The reaction to the Tread has been incredible so far. Though it’s technically a treadmill, it’s really designed to deliver a total body workout, with live and on-demand classes across running, walking, bootcamp, strength and stretching.

Any plans to launch more products?
Peloton is always expanding its fitness content offerings to provide members with an ever-more diverse array of options to stay fit, happy and healthy. In December, we introduced live yoga and meditation classes, which offer a great complement to cycling.

We now have three studios in New York City – Cycling, Tread and Yoga – which are set up for live streaming of content.

You also offer a digital membership. How does this complement the Bike and Tread?
Peloton Digital is free to all Bike and Tread owners and offers access to over 10,000 classes across categories such as cycling, running, walking, bootcamp, strength, stretching, cardio, yoga and meditation.

For non-Bike or Tread owners, you can access the full content library for £19.49 a month – less than the cost of one boutique fitness studio class. We believe the quality and breadth of content, as well as the community surrounding Peloton, sets us apart.

You recently launched in the UK. What has been the response to date?
The response has been incredible, with a community of UK-based members that’s growing daily – even faster than in the US when the business launched there.

Since the UK launch in September 2018, we’ve run our first TV advertising campaign, hosted thousands of rides at Peloton House in London, announced two UK instructors and opened multiple retail locations. Our pop-up in Covent Garden (Peloton House) has now closed, but you can take a test ride at any time at one of our retail showrooms.

We’re currently in our planning phase for a fulltime UK studio and will be opening it in 2020. In the meantime, cycling classes taught by our UK instructors are currently recorded from a location in London. They aren’t live streamed, but quickly become available on-demand for all members to access any time, anywhere around the world.

There’s enormous potential to disrupt the fitness market in the UK, and we’re only just getting started.

Will there be any differences between the way you operate in the UK versus the US?
In many ways, we’ve mirrored the US strategy in the UK. We sell direct-to-consumer through our website as well as through retail showrooms, and have built up our own delivery infrastructure to ensure we provide the highest-quality customer experience at each touchpoint.

Are you looking at any other international markets for expansion?
Right now, our international expansion efforts are focused on the UK and Canada; we launched into the Canadian market in October 2018.

The focus for the UK over the next 12 months is on growing our member base and introducing more people to Peloton. We have no immediate plans to launch the Tread in the UK, though, as we’re 100 per cent focused on penetrating the market with our core product: the Peloton Bike.

I read that you might go public in 2019. Is that still on the cards?
We’re not discussing specific timing for an IPO and, right now, are focused on using the capital we have to expand the business across product, retail and global expansion.

[Editor’s note: Recent news coverage suggests some progress has been made since this interview, with reports naming Goldman Sachs and JPMorgan Chase as the banks chosen to lead the IPO. However, Peloton reiterates that no specific timing is being discussed for an IPO at this stage.]

HAVING LOCALLY-BASED INSTRUCTORS IS REALLY IMPORTANT: THEY UNDERSTAND THE MARKET

Is it your ultimate vision to have numerous studios around the world, all live streaming?
Our studios are different from other cycling studios – they’re really state-of-the-art broadcast production facilities – so our business model will never be to open many studio locations around the world.

At the moment, we’re focused on continuing to offer 14 hours of live cycling content from our current NYC studio, as well as on building the studio in London and a new multistudio facility in New York City, which will open next year.

Having locally-based instructors is really important though: they understand the market, the music and what motivates people. That’s why we announced two UK instructors in November 2018. 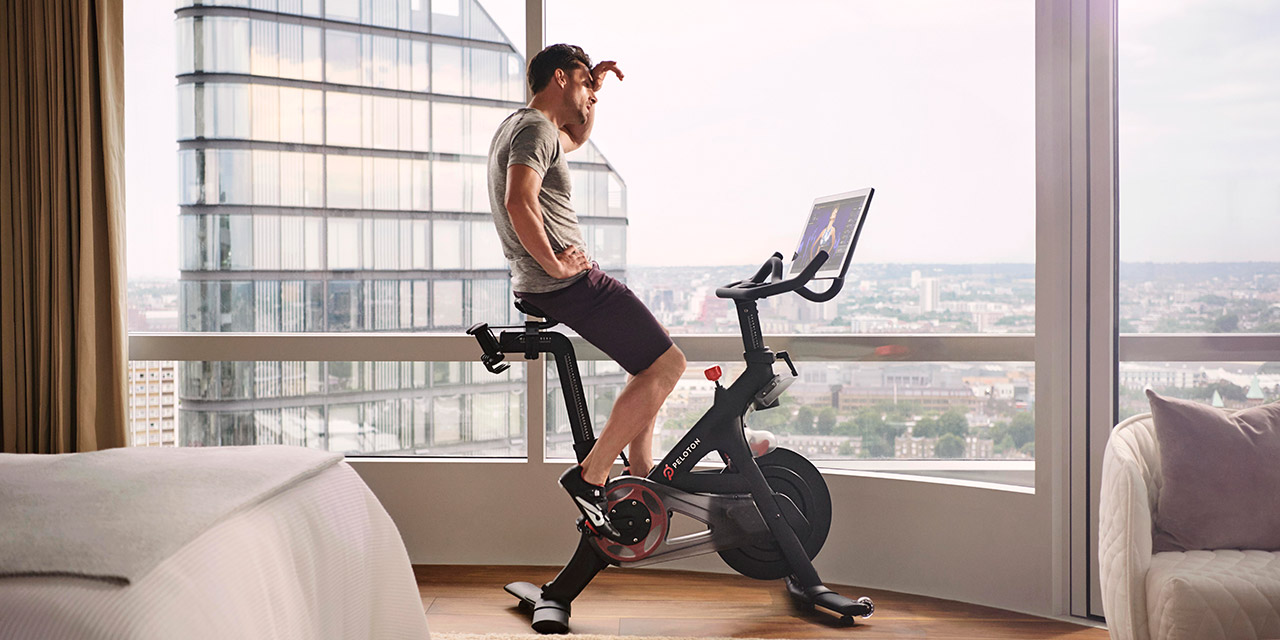 Do you think Peloton has changed the way people want to consume cycling?
Yes. I truly believe that Peloton has reinvented the category and that we’re creating demand.

We often describe Peloton as boutique fitness with a 2ft commute – you no longer have to live in a major city to get the benefit of boutique fitness classes – and the immersive experience of riding with Peloton means you’re motivated to train like never before.

Do you feel athome exercise can genuinely rival the experience of being in a club?
While gyms can still serve their purpose, we believe that fitness is moving into the home, much like movies and video games have over the past decade or so. If you can get a better fitness experience in a better, more convenient location, it could theoretically replace the need to belong to a gym.

What do you see as the future of the indoor cycling market, and what role will Peloton play in this?
I think technology will continue to play a huge role. For Peloton, technology underlies everything we do and is a big differentiator for us. We would consider ourselves to be a technology company first, content second, hardware third.

Ultimately the goal for Peloton is to be the global fitness platform for the home.

“I’ve co-founded, scaled and sold market-leading businesses across Europe in retail, media and digital services,“ says Kevin Cornils.“ I was a founding member of the team that brought the Match.com online dating business to Europe from the US, and was previously CEO of Glasses Direct, Europe’s largest online optical business.

“My passion has always been building businesses that are either creating new markets or disrupting old ones. Peloton is a great example: an exciting business that’s creating a whole new connected fitness market.

“I joined Peloton in January 2018, to oversee global business and expansion beyond the US, but have been following the brand since launch. I went to Harvard Business School with Peloton CEO John Foley, and was the first person in the UK to order a Bike when he launched Peloton on Kickstarter in 2013.

“I believed from the beginning that Peloton was a game-changing concept – one that would resonate with people who care about health and fitness, and who want a convenient and high-quality solution.“