David Lloyd Clubs is in the process of rolling out a boutique-style cycling concept cross its estate. Kate Cracknell gets in the saddle to try out one of its signature classes.
Download PDF
Read Issue

It’s Friday 25 October and I’m at David Lloyd Derby – a club of which I am, in fact, a member – to take part in a pre-launch masterclass for Rhythm, one of the operator’s new signature cycling classes.

I’m looking forward to it. Of the two new classes – Rhythm and what will, come next year, be called Cyclone – Rhythm is the one I’m guessing will best suit my indoor cycling preferences. I’m expecting something SoulCycle-esque, focused on music and the feelgood factor.

I’m also looking forward to it because this isn’t the first time David Lloyd has launched a club-in-club, boutique-style concept. I’m already a huge fan of Blaze, its heart rate-based HIIT offering: think darkened room, music and lighting synced to the workout, three rows of eight stations – treadmills, weight benches, punch bags – and specially trained instructors. It’s superb and, if not wildly dissimilar from other boutique offerings out there, it’s available as part of my membership. That gets a big thumbs-up from me, and it seems from other members too: Blaze has 22,000 unique users every month across the 63 clubs currently offering it, with an astonishing 99 per cent of users ‘very happy’ with their instructor in member satisfaction surveys. Perhaps little surprise, then, that David Lloyd Clubs has recently announced plans to open standalone Blaze studios too.

So, I’m expecting good things of the new cycling classes, both of which are due for imminent launch at the Derby club; it will, in fact, be the first club in the country to launch both Rhythm and Cyclone at the same time.

As I walk in to the cycling studio, it’s clear it has had a refurb and a new AV system since I was last in there: the sound is great and the new lighting, I’m told afterwards, is Stages Flight intensity lighting.

More of Stages Flight in a moment… For now, it’s all about Rhythm.

From the outset there is, as I expected, something distinctly SoulCycle-esque about the set-up, from the helpful welcome and assistance from a bubbly instructor, to the darkened room and candles on-stage, to the music already pumping out to create a party vibe.

And I have to say SJ – the former dancer turned master trainer running the class – is exceptional in her direction and motivational skills. There’s an infectious enthusiasm, a great balance between encouragement to push and encouragement to let it all go, and a flow between bike and floor-walking that felt really natural. Let’s hope the instructor auditions uncover similar superstars for Derby!

while there is a bit of choreography going on, it isn’t so much as to make me feel unable to do it.

But once the class really gets going, differences start to emerge – and they are differences I rather like. First of all, while there is a bit of choreography going on, it isn’t so much as to make me feel uncoordinated or unable to do it. There’s no watching in awe as front-row regulars do double-time tapbacks while I have to settle for pedalling to the beat. That does two things for me: firstly, I feel more motivated to keep going; and secondly, it allows me to focus more on my workout.

And this is the other big difference for me: the workout. While this is a rhythm-based class, I feel like there’s a greater emphasis on performance than I’ve found in some other ‘party on a bike’ rides. We’re talking intervals, hill climbs, pushing the resistance right up to your own personal 100 per cent at times. Annoyingly I’d left the belt part of my MYZONE at home, but others using theirs were, at the end of the class, surprised to see how much of their workout had been in the yellow or even red zones – surprised because it had still felt like fun.

So the programme gets a thumbs-up from me. If I had to be critical, there is one element I think I would remove: the hand weights track. In Rhythm, you stop pedalling for this – a good call – but in that case, does the workout even need it? For me, it was a fantastic cycling class. While I appreciate the hand weights track was there for active recovery before the last big push, I think I’d have preferred to have another great cycling track – and this from someone who’s far from a cycling purist.

But that’s just my opinion. And of course, once Rhythm has been fully launched, if I do feel I want more cycling I can always opt for a 55-minute class instead of this 45-minute one; incidentally, 30-minute formats will also be available. 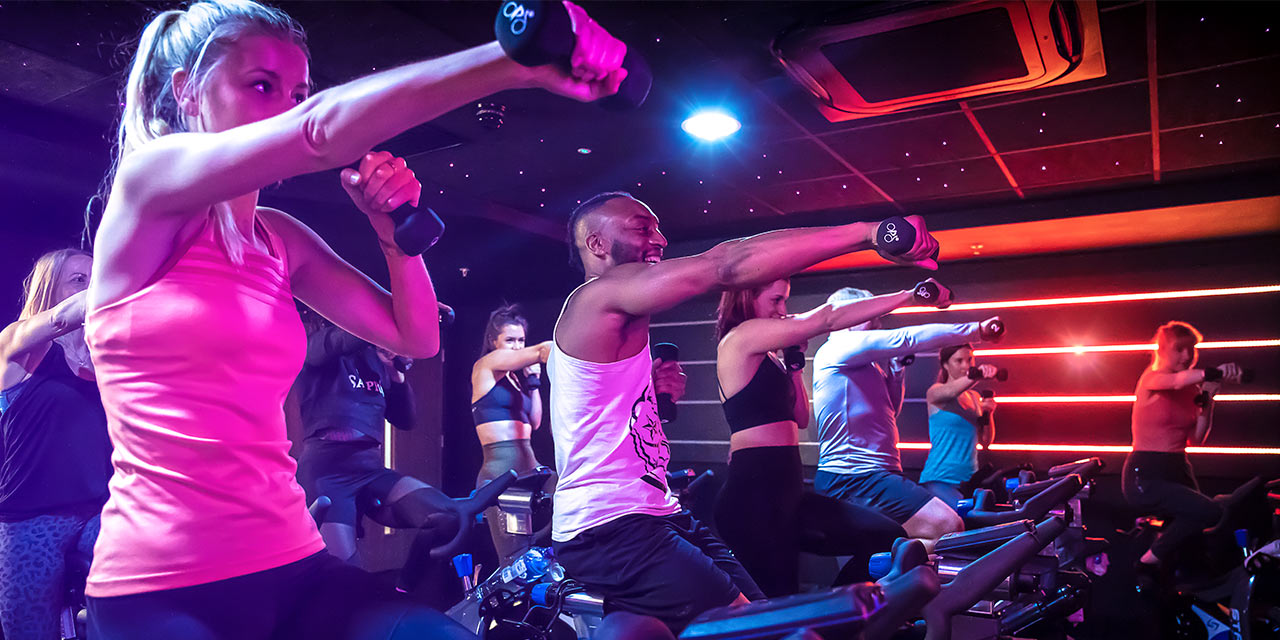 Marie Graham is David Lloyd’s product head for cycling. She explains: “We’ve created the concept, product, programming and instructor training for Rhythm, as well as the ongoing education, and it will be a David Lloyd signature product that’s available only at our clubs. By the end of 2019, Rhythm will have launched in 25 clubs in the UK and Europe, with plans to roll it out to a further 23 clubs throughout 2020.”

a cycle class can be an emotional, musical journey, but it can also be stats- and performance-based.

But what David Lloyd has sensibly done is steer away from being a one-trick pony, complementing Rhythm with a performance brand – Cyclone – under which it will be offering a range of stats-focused, power-based classes.

“The ultimate goal is to get more people into the cycle studio, and that means getting past people’s misconceptions of what a cycle class is,” says Graham. “It can be different things: it can be an emotional, musical journey, but it can also be stats- and performance-based. Our two new products reflect this.”

Neither is Cyclone a ‘one size fits all’ format, instead offering a range of options from which instructors can choose: HIIT, aerobic training, endurance training, and even advanced performance-based rides.

Importantly, as with Rhythm, these classes are designed to be inclusive and achievable, not just for elite athletes. Cyclone will allow riders to book a specific bike, so people’s FTPs can be pre-loaded onto their consoles, and that means workouts are personalised: everyone will be challenged to hit the same zones, but the wattage needed to achieve this will differ from person to person.

“Our approach ensures we can cater for all interests within cycling, hopefully growing the number of people taking part,” confirms Graham. 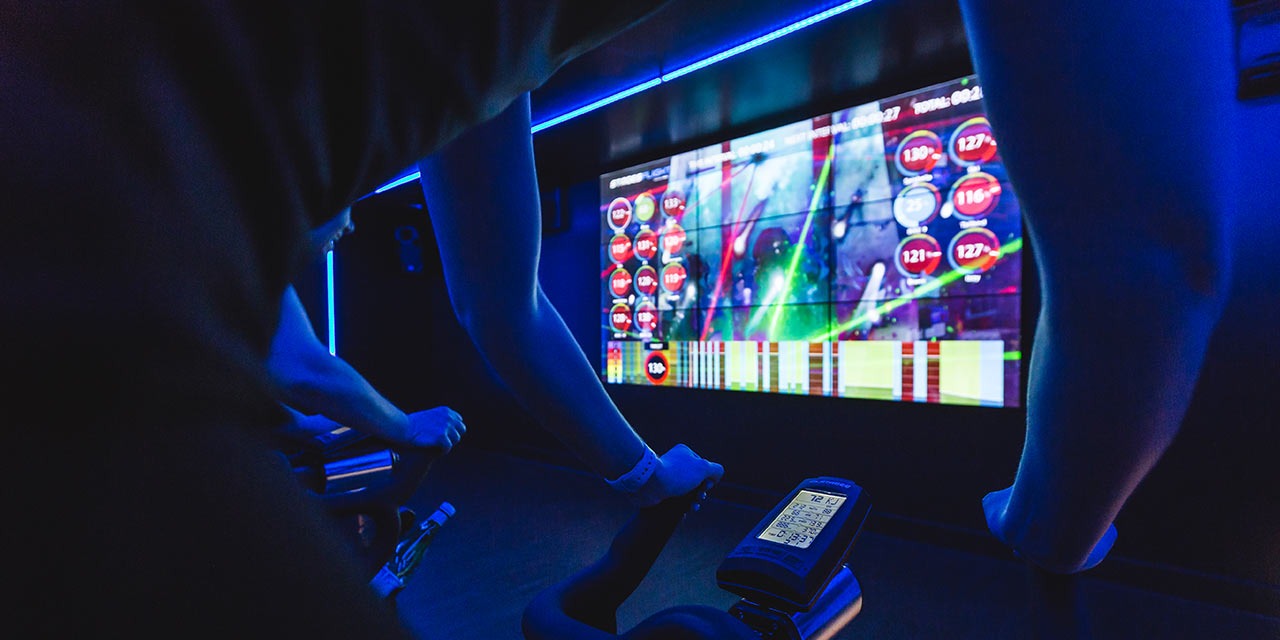 A cyclone is coming

The story with Cyclone isn’t quite as clear-cut as Rhythm, in that the 14 clubs that have been piloting the concept actually have Stages Flight at the moment, not Cyclone. It’s only when Cyclone is launched in 2020 – to these same 14 clubs, as well as to a further 36 by the end of the year – that the programme will become ‘Cyclone powered by Stages Flight’.

Graham explains: “Stages Flight is available globally; we currently offer it as a class in 14 clubs and have taken some great learnings from it. But we wanted to take it a step further, launching our own David Lloyd product. The result is Cyclone powered by Stages Flight.

“When Cyclone launches next year, it will have the same performance-based approach as Stages Flight – with a bespoke version of the Stages software – but there will be an important difference.

“Stages Flight does not currently come with any pre-choreographed ride profiles; Flight comprises the digital platform, screen and stats interface in the studio, with riders’ results saved into a Stages Flight account. Instructors receive training on how to build ride profiles, with access to a small library of examples, but from here they essentially build their own freestyle classes. It’s really down to the individual instructors to take all the science and get results for members.

boutiques claim no big box operator can do it as well as them; david lloyd is doing a pretty good job.

“What we’ve done is create bespoke, choreographed, quality-assured ride profiles that will be white-labelled to David Lloyd Cyclone. Our system will consist of bespoke music and video libraries, with instructors able to choose from libraries of categorised rides – 30-, 45- and 55-minute formats – to best suit their members’ needs and fitness levels.

“Our product and programming will be powered by the Stages Flight IT platform in the studio, but will not be available anywhere else and our members’ ride results will be saved to our David Lloyd Cyclone account. Because this is ultimately our vision: wherever we can, we want to create premium concepts that aren’t available anywhere else, and that people therefore have to join David Lloyd for.

“By the end of 2020, we will have 51 clubs offering both Rhythm and Cyclone, with the studios rebranded as Cycle Hubs. It would be fantastic to see these programmes continuing to expand across our 116-club estate in the future.”

Sadly, I couldn’t make it to the Flight/Cyclone masterclass, but if it’s delivered as well as Rhythm and Blaze – and if David Lloyd’s own instructors can match the on-stage presence of the likes of SJ – it looks as though the operator might be on to a winner.

After years of boutiques claiming no big box operator could do it as well as them, it’s interesting to see that David Lloyd is doing a pretty good job. Frankly, when all these classes are included in my membership, even ‘nearly as good’ would arguably be good enough. My view, certainly from my experience of Rhythm and of course Blaze: they’ve already done better than that.