Heart rate, RPM, power zones… Which training method should your club or studio use in its indoor cycling classes, and why? For Peaks Coaching Group founder and CEO Hunter Allen, it’s all about power. He shares his thoughts with RIDE HIGH.
Download PDF
Read Issue

What do I mean by that? Heart rate training has been around for many years and it’s an important and valid metric. It shows the intensity of your intention – how hard you’re trying to push yourself. That’s very useful for instructors in particular, allowing them to read the room and understand the effort each participant is putting in. With the addition of colour zones, it’s also easy to understand and can be very motivating in a class environment.

However, the issue is this: there are many factors that can impact someone’s heart rate. It isn’t exclusively a response to training. Yes, your heart rate could be high because you’re really pushing yourself in your workout. However, it could also be high because the room is too warm and you’re over-heating, you’ve had lots of caffeine, you’re stressed, or because of a number of other external factors.

In short, HR training tells you how fast your heart is pumping, but it doesn’t tell you why. It can also vary quite notably from day to day. Plus, heart rate zones are based on your max HR – a figure that doesn’t change as you get fitter. It means you can’t easily track or build on your progress.

How is power different?
Whether you’re in a studio or on the road in the rain, 200 watts is 200 watts. This is why I refer to power as the ultimate training dose: you can very precisely specify a number.

Let’s take the analogy of weight training. Month one, you might have 20kg on your bar. Next month it’s 30kg, a few months later it’s 50kg. The weight is your training dose and the rising number reflects the progress you’ve made. It’s the same with wattage: you can see your improved performance on the power meter of your bike as your output rises from 200 to 220 to 240 watts over time.

Then there’s a measure called FTP – functional threshold power – which is a great tool for a class environment. Every individual can calculate their personal FTP, which is directly related to their fitness level. Rather than specifying a wattage, an instructor can then specify an FTP percentage they want the class to ride at. In turn, this ensures every individual is working according to their current fitness level – but also at exactly the right load for the training goal.

How does FTP work?
Your functional threshold power is the highest average power (wattage) output you can maintain for an hour, going as hard as possible for the whole hour. You then take that average wattage as 100 per cent and build your training zones around it.

Zone 1, active recovery, sees you cycling at 55 per cent or less of your personal FTP. It’s an important zone in every class and for every cyclist: it stops you training too hard and ensures you’re ready for the next effort.

“Every individual can calculate their personal FTP, which is directly related to their fitness level. An instructor can then specify an FTP percentage they want the class to ride at.”

Zone 2, endurance, is where you could spend all day cycling. You’re at 56–75 per cent of your FTP, and as the name suggests, it’s about improving your endurance.

Zone 3, tempo, is a zone most people could stay in for perhaps 30 minutes to a couple of hours – or eight hours if you’re a pro cyclist! You’re now working at 76–90 per cent of your FTP, and the benefit here is improved aerobic capacity and muscular endurance.

Zone 4 is your FTP zone, and this is the measure that really defines your fitness. It’s a bit like the one rep max in weight training: you quote your FTP to someone and it’s a shorthand for how fit you are. In this zone, you’re working at 91–105 per cent of your FTP, and translated to real world cycling it’s about how fast you can ride outside: with an FTP of 180 watts, you might be able to maintain 15mph; 220 watts and you’re looking at perhaps 20mph. Physiologically, it’s about improving overall cardiovascular fitness and the body’s ability to handle lactate in the blood.

Zone 5 – 106–120 per cent of FTP – is the VO2 max zone. We’re talking three- to eight-minute all-out efforts, as if you’re riding up a steep hill. You’re training your body’s ability to bring oxygen into the lungs and from there to the bloodstream and the muscles; your VO2 max is the efficiency with which your body can do this, and it can be improved with training.

Zone 6 is anaerobic capacity, spanning 121–300 per cent of FTP. We’re talking very intense intervals of perhaps 30 seconds to two minutes only, and it’s about improving your ability to produce energy without oxygen. Working in this zone brings a rounded approach to fitness.

Finally, anything above that is zone 7 – neuromuscular power. Think of it as your very best sprint for five to 15 seconds, which might typically be anything from 700–2,500 watts. This is pure muscular strength building.

How do you calculate FTP?
As I say, FTP is about going as hard as you can for an hour, but not everyone wants to do that – not even pro athletes! There are a few shortcuts, but I believe the best is a 20-minute test that you can run as a class.

You start with a 20-minute warm-up – or 10–15 minutes if you want the class to fit neatly into an hour’s slot – including 3 x one-minute fast pedals to wake up the legs.

Then you do five minutes cycling as hard as you possibly can to exhaust the body’s anaerobic capacity – something that could otherwise skew the results – before 10 minutes of recovery, cycling at around 65 per cent of your capacity.

Only then do you do the 20-minute time trial, striking up a strong, steady wattage that you think you can maintain for 20 minutes; you can tweak as you go, because we take an average reading, so don’t start too hard! Your FTP is your power average for the 20 minutes, minus 3–5 per cent to even more accurately estimate what you could do in an hour.

The class ends with a cool-down of 10–15 minutes’ easy pedalling.

People often object – they say they’re tired by the time we do the time trial – but that’s the whole point. We’re trying to approximate what you could do in an hour, so you have to be a little fatigued when you begin the 20-minute test.

Crucially, you should re-test your FTP every eight weeks, because fitness generally changes in eight-week cycles. To keep progressing, you need to continually re-set your training zones around your rising FTP.

Do you always favour power training?
In a word, yes. It’s a great way to scale for everyone in the room, so they can train in the same zones and progress together but without having to achieve the same wattage.

It’s also possible to create classes around specific training objectives. “On Monday, our class will train the cardiovascular system with relatively low force; on Tuesday we’ll focus on improving our FTP, with 4 x 10 minutes at 95–105 per cent of FTP; Wednesdays will be all about improving anaerobic capacity, with short, hard efforts of 30 seconds to two minutes; Thursday’s class will focus on VO2 max, with three- to five-minute intervals, but we’ll throw in five muscular strength intervals first.” And so on.

Not every FTP zone is suitable for every level of fitness, though, so classes should be clearly labelled for their training objectives, benefits and level of experience required. Unfit beginners should focus on zones 1–3, for example, but note that it doesn’t get progressively harder from zone 1 up to zone 7: fitter beginners could do zone 7 and even zone 6, provided intervals aren’t too long and there’s plenty of variety in the class.

On the other hand, if you put a beginner straight into an FTP intervals class, I can pretty much guarantee they’ll never come back!

This is the beauty of power training, though. You know exactly what energy system you’re training – VO2 max or threshold power, for example – which is something other modes of training don’t allow for.

“How you create your wattage is important. In a general-purpose class, aim to push people out of their cadence comfort zones.”

Where does cadence (RPM) fit in?
Cadence can be a challenge for many people in a class, especially beginners who aren’t used to moving their leg muscles in a pedalling motion. At first, people generally want to pedal slower – perhaps 70–80 RPM – until they get used to it.

At face value, that may seem like the same outcome, but how you create your wattage is important: in this example, the 40 RPM approach is about producing the watts through force, which means you’re training muscular strength; the 150 RPM approach produces watts through speed and trains cardiovascular fitness.

When you teach a general-purpose indoor cycling class, you should aim to balance load between the muscles and the cardiovascular system. You need to push people out of their cadence comfort zones, helping endurance runners build muscle and weight lifters improve their cardiovascular fitness. You should also move people through the different FTP zones to work on strength, cardiovascular fitness and muscular endurance. This is how you use power training to improve all-round fitness.

Get in the zone

If the key to effective indoor cycling is working to specified percentages of your personal FTP – well, how exactly do you do this? Easy, says Allen: with indoor cycling bikes now boasting advanced computers, you simply enter your personal FTP at the beginning of class and the console will show you what % FTP you’re hitting throughout the workout. 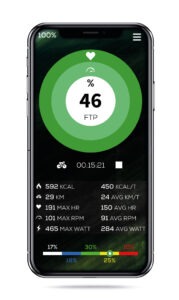 BODY BIKE Smart+ goes a step further. Believing that exercisers should have clear ownership of their personal data, and that operators should have future-proofed bikes, BODY BIKE got rid of integrated consoles around five years ago. In their place, an app that links seamlessly to any BODY BIKE Smart+ bike, transforming exercisers’ phones into portable consoles that can be upgraded with each app update, and that let exercisers carry their data with them.

The latest app update, launched in April, features in-saddle installation: simply pedal for 30 seconds and the upgrade is installed on your phone, bringing your previous training history across with it. Alongside a host of new features, including achievement-based status updates, are all the old favourites – not least a number of FTP features.

There are two FTP tests you can do on your own – a five-minute test and a burnout test – which, as BODY BIKE CEO Uffe A Olesen explains, “allow people to easily do a test themselves at any point, rather than having to wait for their club to run a class as Hunter suggests”. Alternatively, if you already know your FTP, you can simply store it in your personal app settings.

You then monitor your % FTP during class by tapping the middle of the wattage ‘target board’ to reveal your % FTP figure.

% FTP is just one of numerous metrics that can be tracked through the BODY BIKE Smart+ app, alongside % max HR, cadence, kilometres travelled, calories burned and workout duration.

The pain-reducing power of VR