In January 2022, a team of cycling enthusiasts from Australia reclaimed what they considered to be ‘their’ Guinness World Record – for Longest Static Cycling Class. Kevin Moultrie, the man behind the motion, talks to RIDE HIGH.
Download PDF
Read Issue

What inspired this record attempt?
In 2009, aged 47, I was diagnosed as morbidly obese. I weighed 154kg, I couldn’t see my toes and it was a struggle to climb a set of stairs.

That same year, I discovered indoor cycling and have worked out on an indoor bike, six days a week, ever since. I’ve dropped 50kg and, now aged 59, feel fitter and happier than I did in my 20s and 30s. The social aspect of cycling classes at my local gym has also been hugely beneficial for my self-confidence and my overall mental and emotional wellbeing.

“Our World Record attempts are all part of our fundraising efforts to give kids and teens in under-served communities a happier, healthier start in life”

Inspired by this transformation, I made a career-changing decision and launched TRANSFORM-US Fitness for Kids. Based here in Australia, we deliver fun, structured PE and sports programmes into primary schools to help reduce childhood obesity, focusing on improving fundamental movement and object control skills.

As the years went by, though, I started to see a huge socioeconomic divide opening up. Kids from poorer communities were falling further behind in their learning and their overall health and wellbeing. In 2018, I set up the Fab to be Fit Foundation to help bridge that gap, raising funds to deliver our proven programmes in under-served communities.

Our World Record attempts are all part of our fundraising efforts to give these kids and teens a happier, healthier start in life.

Why this particular World Record?
Sporting challenges feel very relevant to our goals at the Foundation, so our fundraising efforts include a lot of crazy physical and sporting challenges – entering teams into the Spartan Beast Race, for example.

As I mentioned before, I’m a regular indoor cyclist. Many of our volunteers and ‘friends’ are also outdoor and indoor cycling fanatics – a number of them have completed crazy ultra-endurance outdoor cycling events such as Race Across America, the Indian Pacific Wheel Race, 24hr Everesting, 24hr MTB events and so on – so we started to discuss an endurance-style fundraising event.

In early 2019, I came across the Guinness World Record (GWR) for Longest Static Cycling Class, which at the time was held by a team of New Zealanders and sat at 26hrs: 04mins: 24secs. Our team gladly accepted the challenge, and on the weekend of 31 August 2019, we set a new Guinness World Record of 27hrs: 00mins: 53secs, with every one of our 15 riders completing the challenge.

Sadly, during the early days of COVID lockdown here in Australia, a team of endurance cyclists from the United States officially broke our World Record, adding another hour to set a new time of 28hrs: 00mins: 00secs.

We decided we wanted to reclaim what we saw as ‘our’ World Record.

How did it go this time?
We were delayed by a couple of months due to Omicron, but in January 2022 it was finally time – and the short version is, we’re now Double World Record Holders having set a new record of 30hrs: 02mins: 16secs.

The longer version of the story is this… We had lined up a team of 18 riders, including our instructor James Lamb – one of six returning riders from our 2019 team. By the Thursday before the event, we had lost two riders to COVID, then lost two more on the morning of the event. GWR rules state that the class must be 11 people – 10 plus the instructor – so COVID certainly ate away at our safety buffer.

“For the 30 hours of the event, our instructor James Lamb had to learn the choreography to 330 tracks”

We started at 10.00am on Saturday 15 January with 14 in the team, lost one rider overnight to a medical situation, and finished at 4.00pm on the Sunday afternoon with 13 riders, setting a new World Record. 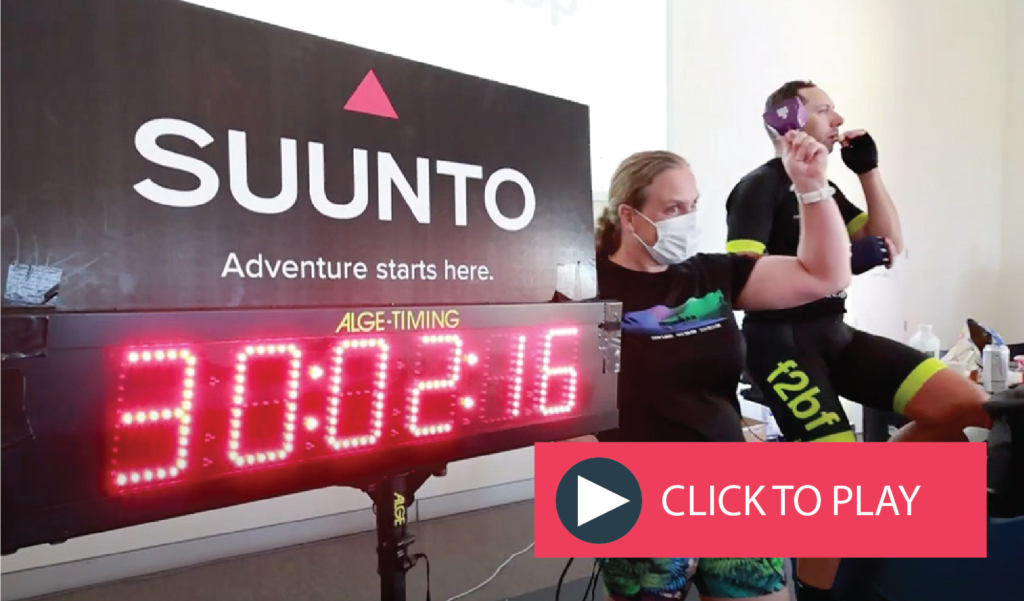 We got some great media coverage to drive awareness of the Foundation, and even though events like this cost a lot to run, we raised a net profit of over A$12,000. This has gone straight back into the Foundation, allowing us to pay specialist staff to run our programmes free of charge in selected communities.

How strict are Guinness World Record rules?
Very – and you have to put a lot of measures in place to ensure compliance. First, you need two independent witnesses, two timekeepers and a steward in the room at all times during the attempt – we had them on four-hour rotating shifts – to ensure everyone is doing the right thing. You also need cameras in the room capturing continuous footage of the entire attempt from a number of different angles: focusing on the instructor, the digital timeclock, and all the riders.

The instructor must be the same person throughout and the whole team rides together for the entirety of the attempt. The ride must be structured as a proper indoor cycling class: the RPM of the music has to change – 60–90RPM for standing climb tracks, 105–130RPM for seated speed tracks, and so on – and as a team, you must follow the instructions and positions of the instructor at all times. The cameras pick up the cadence of each rider, establishing whether you’re in-time with the music and the instructor.

There’s no GWR requirement to provide wattage, calorie or distance data, though: we just had this because we were using the BODY BIKE app. For the purposes of the World Record attempt, the cameras just need to show everyone riding to the beat of the music and to the instructor’s directions.

As in a standard indoor cycling class, there are very short breaks – 10–15 seconds – between tracks where you can stretch your calves, but Guinness World Record rules also allow a five-minute break after every hour completed, or 10 minutes after two hours. That break has to be taken together as a group, though: you can’t have individuals taking their break at different times.

I hung an A1 chart on the wall that mapped out our ride sequences and breaks, when meals would be brought out, when we had to be weighed and when we’d do a kit change. We had an accredited sports dietitian and her team on-hand for the full 30 hours, keeping us fuelled and hydrated and weighing us every six hours, and we learned to eat while cycling.

How did it feel to regain the World Record?
Speaking from my own perspective, this attempt was physically and mentally far harder than the first one: I hit the wall at about midnight this time, four hours sooner than last time. Even as we passed the previous record of 28 hours, I was still wondering whether I would be there to hit the 30-hour mark. It was a real sense of achievement and fulfilment to make it to the end.

Would you ever do it again?
If anyone is stupid enough to want to take this record off us, they are most welcome to it. Twice is enough!

In fact, just before our attempt, James and I found out that a team in the UK had completed a 29-hour ride the weekend before, which was still being ratified. Luckily we’d always planned to do 30 hours, so we kept the news to ourselves rather than alarming our team. But ultimately, I’m sure someone will beat us at some point. And when they do, as I say, they’re most welcome to it. No way am I going again!

Anyone you’d like to recognise?
Our whole team was incredible: riders, volunteers, supporters, medical staff, dietitian and physio who pushed us through the pain barrier and back out the other side.

However, I would like to give a special shout-out to our instructor James Lamb, who also led our previous Guinness World Record. For the 30 hours of the event, James had to learn the choreography to 330 tracks – but of course, he was also under huge pressure to constantly review everyone, checking how we were looking and feeling, checking everyone’s cadence, pushing everyone along and making sure no-one fell out of sequence.

James really is the only indoor cycling instructor I would ever ask to take on such an epic event. To be able to manage a team through such a pain barrier and come out the other side, as well as focusing on his own highs and lows… What an achievement!

“If anyone is stupid enough to want to take this record off us, they are most welcome to it. Twice is enough!”

My thanks go too to Rupert Guinness – internationally acclaimed sports journalist, best-selling author, ultra-endurance athlete and one of our 13 riders – whose mental and physical strength and inspirational stories helped get our team through this challenge.

Finally, I’d like to thank BODY BIKE, who generously donated 30 brand new BODY BIKE Smart+ OceanIX indoor bikes for our event. Incredibly smooth and robust, these were the perfect bikes for our epic ride. They have since been fully serviced and sold to gyms around Australia as special limited-edition bikes.