Cycling is a way of life in Denmark, but the Tour de France had never started this far north – until this year. The city of Nyborg hosted in style, with a special ‘yellow jersey’ group cycling event among the many celebrations. Kate Cracknell reports.
Download PDF
Read Issue 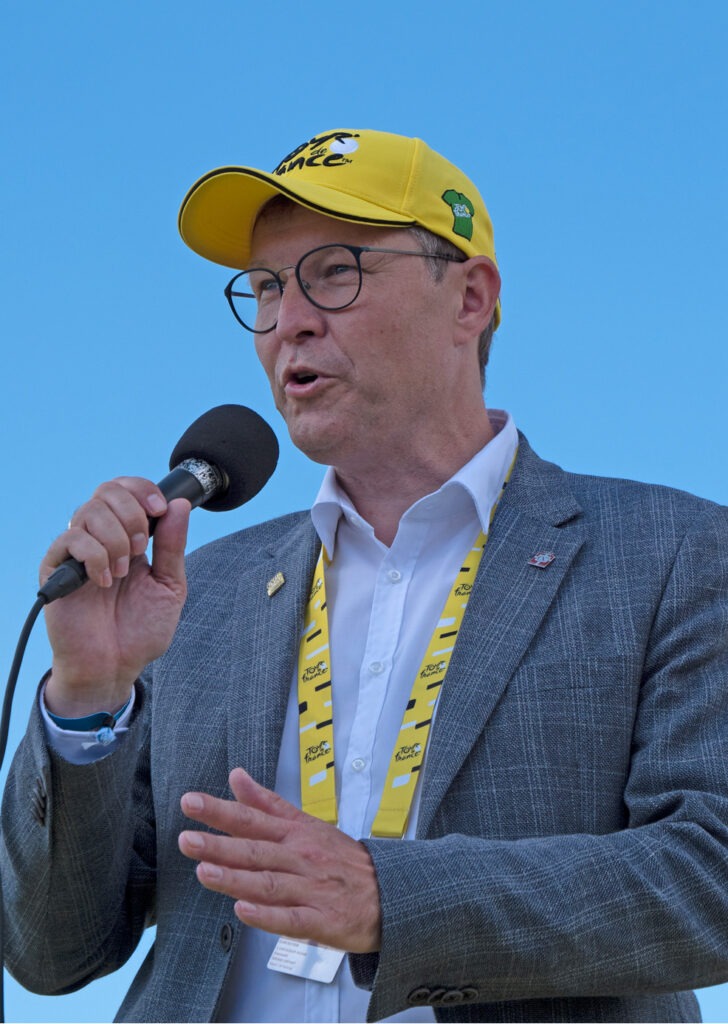 What was Nyborg’s role in the 2022 Tour de France?

The second leg of the Tour finished in Nyborg, so our city welcomed the riders as they crossed the line on 2 July, having cycled the 202km from Roskilde.

It was a huge honour for Nyborg: ours is a municipality of just 32,000 inhabitants, so to be involved in one of the world’s greatest sporting events was exceptionally special for us.

And it wasn’t just about us, either: it was about the whole of Denmark, with the country as a whole awarded this year’s Grand Départ. As a result, five cities across Denmark hosted the first three stages of this year’s Tour.

Why did Nyborg want to be part of it?

First of all, as I say, it was a great honour. Beyond this, however, there were – and will hopefully continue to be – very practical benefits of having been involved.

The boost to our local businesses, for example. We have a lot of accommodation in our city, and our hotels and campsites were in high demand from the moment our involvement in the Tour was announced in 2019. In turn, other local businesses – shops, restaurants, cafés and so on – also benefited.

Then there’s the long-term impact on tourism. The Tour de France is aired in 190 countries around the world, which gave us a wonderful platform to present a ‘postcard’ of Nyborg – showing off our city, our history, our culture and hopefully tempting people to visit.

What did the day involve?

It wasn’t just about race day, in fact, or even just about cycling: there were lots of sporting, cultural and educational events in the lead-up to 2 July.

We had local schools learning about France, for example, and businesses putting yellow bikes all around the city. There was also a sold-out family-friendly event on 11 June where 16,000 amateur cyclists rode some or all of the Tour de France leg from Roskilde to Nyborg.

But the day itself was of course very special, with Nyborg welcoming more than 80,000 visitors including HRH the Crown Prince of Denmark.

Obviously not everyone was able to stand at the finishing line, so we had 12 event zones across the city where people could watch the race on a big screen, enjoying music, food and activities too. We closed many of the roads in the city centre, turning it into a big festival.

“The Tour de France is aired in 190 countries, giving us a wonderful platform to present a ‘postcard’ of Nyborg”

We had cultural activities too: archery, for example, because ours is a historic city with a castle. And then in the evening we had a big party and concert.

All our council-organised events were free, but we also allocated space to local organisations to run their own events, which they could charge for if they wished. We had football clubs hosting fan-zones, for example, and a BODY BIKE group cycling class.

For us, these independent events were an important part of the story. We set the stage and supported them with some infrastructure, but the success of the day wasn’t purely down to us: everyone came together to create something very special, and it looked amazing when the TV helicopters flew overhead and saw it all happening.

What did all this cost Nyborg?

Was it worth it? Absolutely, even if you just look at the reach and impact of the publicity for our city. To reach an audience of that size, and in so many countries across the globe, we’d quickly have spent that much – and more – on commercials, brochures, PR and so on.

And that’s without factoring in the immediate boost to local businesses or the sense of pride across our city, which is impossible to put a price on.

It was the first time Nyborg had ever done something on this scale, but it proves that we can.

Whether cycling fans or not, we had strong support from residents across the city: there was a huge sense of pride and a powerful coming together, including a large number of volunteers who gave their time to show the world what great hosts we could be.

A key aspect of our Tour legacy will therefore be the learnings we’ve drawn and the foundations we now have in place to host similar events in the future. Nyborg may be a small city, but we have big ambitions!

Tell us about your event…

As soon as I knew the Tour was coming to Denmark, I wanted to get involved. I have a long history of organising mass indoor cycling events, so I teamed up with Berit Kolding Wedel of Nyborg Family and Company Sport, a local NGO, to organise a seven-hour cycling event which took place just 300 metres from Nyborg’s Tour de France finishing line.

We had seven hour-long slots, each with its own instructors, and then we had ‘wingmen’ on-stage next to them to create a strong presence: there were five or six people cycling on-stage at all times, all dressed in the famous Tour de France-style yellow jerseys.

“We had five or six people cycling on-stage at all times, all dressed in Tour de France-style yellow jerseys”

The brief to all our instructors was simple: make it a party with great music and a great vibe. And don’t make the workout too hard, because quite a lot of people are going to be cycling the full seven hours!

We had a big screen in front of the bikes so participants could follow the Tour while they rode, but mostly people were absorbed in their own ride with our instructors. It was really only in the last hour or so of the race, when we could hear the helicopters following the Tour approaching the city, that people began to focus more on the screen.

How many people took part?

We had 75 BODY BIKES and about 250 participants. Somewhere between 10 and 15 people did the full seven hours of cycling, but most people switched in and out with friends so everyone could enjoy an hour or two.

For the last two hours, we made it compulsory for all participants – as well as the instructors on-stage – to wear the yellow jerseys we provided as part of the ticket price.

It was incredible. Everyone was smiling, the weather was perfect – sunny but not too hot and with a lovely breeze – and the music was pumping. We were just one small part of a huge celebration across the city, but you could hear our event from kilometres away!

We could hear the shouting of the Tour supporters near the finishing line too, which added to the buzz.

“I’ve organised a lot of cycling events in my life, but this really was a once-in-a-lifetime experience”

The whole event was just so happy and positive. When we finished, participants told us – and continued to tell us on social media – that it was a historically great event. I’ve organised a lot of cycling events in my life, but this really was a one-off. Everyone was on a real high.

Thousands of people came to watch what we were doing throughout the seven hours, too, feeling the energy and following our progress. Local newspapers were taking photos. It was such a great advert for indoor cycling.

How will you look back on this?

Across Denmark, there was a massive focus on making the Tour de France one big party, with armies of volunteers coming together to make it a success. Support for the race itself was also huge, with around a third of the Danish population turning out on the Tour de France route to watch the race go past.

Running our cycling event as part of this… It was a once-in-a-lifetime opportunity and just the most incredible experience.