A cast of thousands

“My initial ambition for Ørbike, back in 2014 when we ran the first event, was to raise money to buy equipment for our local fitness club,” says Jesper ‘JAS’ Sørensen, Ørbike organiser. “Beyond this, my dream – and my ultimate goal – has always been to raise money for charity, especially the Children’s Cancer Foundation. People like to participate in events that support charity, and as a result, Ørbike has raised €20,000 since the event began.”

The Ørbike concept – back-to-back indoor cycling classes for hundreds of people at a time, all led from the stage by top instructors to the backdrop of a pumping music soundtrack and great lighting – has proved very popular: in spite of taking place in the small town of Ørbæk, Ørbike has grown to become Denmark’s second largest indoor cycling event, taking place every November.

“The first year, we had 88 bikes for a six-hour event. That year was very hard. The breakthrough came when we entered into partnerships with sponsors – that’s the reason we’re still here today,” says Sørensen. “By the second year, we had already leapt up to 256 bikes, 10 hours of cycling, and all 256 tickets were sold out in two days.”

Fast-forward to 2019 and the event’s appeal shows no sign of waning: Ørbike 2019, which took place over 12 hours on Saturday 9 November, attracted a total of 1,500 participants. And that, of course, meant a lot of bikes – 272 BODY BIKES, to be precise.

“In addition to the five people in our core team, we had 150 volunteers involved in the preparation of the event: setting up the light, the show, the food, and gathering the bikes from fitness clubs across Denmark. We had 200 brand new SMART+ bikes from BODY BIKE and Fitness Engross, as well as another 72 BODY BIKE SMART+ which we borrowed from clubs around the country,” says Sørensen.

A star is born

“For me, the key ingredient to running a successful event such as this is that you must really believe in what you’re doing. You must go for it 110 per cent,” Sørensen continues. “It involves a lot of hard work and a continual drive to make improvements and refinements every year to stay at the top of your game.

“We won’t settle for anything other than the best when it comes to music, instructors,
set-up. People leave Ørbike on a real high, and it lasts for days.”

Already on the road a lot as part of his day job – as a country sales manager for the cycling clothing brand Assos of Switzerland – Sørensen has the chance to pop in to health clubs and studios around the country. By participating in cycling classes wherever he goes, he effectively has the chance to ‘audition’ instructors to find the country’s best, who he can then invite to be involved in Ørbike.

He also believes Ørbike has space for both experienced and new instructors – what matters is your stage presence. “You can be the best instructor in your local centre, but not everyone has the presence to be on a big stage,” he explains. “I look for instructors who have experience from other events, but I also look for new names who I can help build up to become the new stars.”

And that’s possible because instructors are given free rein to bring their sessions to life at Ørbike, constrained only by their imagination. A great example comes from Sørensen himself, in his exciting session at this year’s event. Challenged by a friend who felt he only ever coached traditional cycling classes, Sørensen says: “I wanted to prove him wrong, so I delivered a circus-style session with ‘Circus JAS’ video footage up on the big screen and clowns cycling on the stage with me.

“I also invited a famous Danish violinist, Michella Høj, on-stage for the finale. I wanted to give it some real spice and for participants to get goosebumps.”

Participation at Ørbike can be as an individual or a group, with prices starting at €130 for a bike on the back row – you can then switch as many people in and out of the saddle as you choose throughout the 12 hours. Bikes in the front row cost €535 and are available only to businesses as part of a sponsorship package.

Bitten Kvist Jacobsen, a member at Struer Fitness, was one of the 1,500 participants at this year’s event. She comments: “Ørbike is very social. Every time I go, I make new friends. Everyone takes care of you – if you don’t know how to set up the bike, someone will help you – and everyone says ‘hi’.

“My friends at home aren’t really into indoor cycling – they don’t understand my ‘craziness’ about it – but at Ørbike I’m surrounded by people who share my interests and my passion. That’s why I love it. I also get new ideas that I can use in my own training at the gym. It’s invaluable workout inspiration.”

And that matters, because Jacobsen is a cycling aficionado, taking part in numerous indoor cycling classes every week. Why? For the feelgood buzz it gives her. “Every time I go to a cycling class, even when I’ve had a long working day, it feels good,” she explains. “This is ‘Bitten Time’. It improves my mood, making me happier. If I don’t get my exercise, my colleagues notice. They’ll say: ‘Bitten, you haven’t trained today!’”

So, does she not get tired after all those hours of cycling at Ørbike? “You can’t get to hour five without being a bit tired,” she acknowledges, “but the music gets your legs started. You sweat like crazy, but it’s pure joy and the music is so motivational.

“The instructors are fantastic too – so prepared. They get down off the stage and get us involved. I think my favourite session this year was probably hour number seven, instructed by Kim Lahn, because of the music and the energy – but I enjoyed every hour as a participant.”

Finally, the 1,499 other participants are another factor to take your mind off the pain. “At an event as big as Ørbike, there are so many people cheering you on,” says Jacobsen. “It’s such a great feeling. The spirit at the event really is so special.” 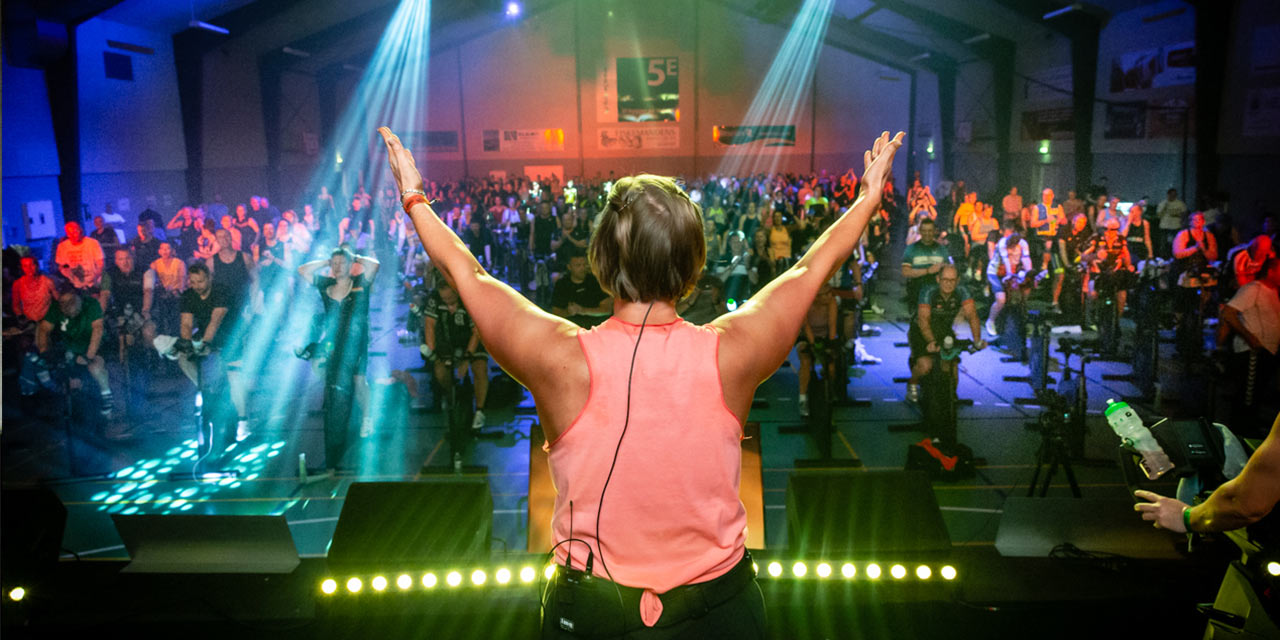 One of the instructors at Ørbike 2019 was Lene Lystrup from SATS Aalborg – an experienced instructor who was previously on the Ørbike stage three years ago, and who was delighted to be back. “For me as an instructor, it’s a really professional event,” she says. “The sound is great, the lighting is great. Everything is taken care of. All you have to do is perform.”

But perform the instructors must. “The expectations are high because all eyes are on you,” confirms Lystrup. “I do things quite differently from the way I instruct in a normal class. I use myself a bit more – I put myself out there to ensure I connect with everyone, and I really focus on telling everyone how great they are. They then give me love back and really get into the zone, and they end up buzzing and on a real high.”

Well known for her music, Lystrup spends around 100 hours preparing her programme for Ørbike. “Music is the key for me, but you have to use it in the right way to create a flow,” she says. “It’s a feeling I can’t really describe, but the feedback I get from participants is that mine are always happy, sing-along sessions.

“Figuring that people were more likely to start singing at an event than in a normal class, I therefore decided to go all-in and create a karaoke cycling session for this year’s Ørbike! I wanted everyone to come out thinking: ‘Wow, that was like a Friday night out with my friends.’”

Indeed, although participants benefit from the training at Ørbike, and instructors in the audience are there to pick up ideas, Lystrup feels the social aspect is even more important at events such as this: “I know some people will be training using the colour-coded effort zones on the BODY BIKES, but honestly – for me, the most important thing is that people are having a party.”

Lystrup also added a personal touch this year, taking her best friend on-stage to cycle next to her. “She’s lost 60lbs by cycling. It’s such a wonderful story, I was worried I was going to cry when she was with me on the stage,” says an emotional Lystrup.

When you consider all of this – the personal touches and the 100 hours of prep work – it’s clear Ørbike has a special place in Lystrup’s heart. “It does,” she agrees, “because five years ago, Jesper took a chance and believed in me, inviting me to get involved. There wouldn’t be an Ørbike without Jesper – he’s the one who sets the whole vibe.

“I also love that he and his team listen to the instructors and the participants. They take on-board all the feedback and make changes were needed. For example, this year we had 272 BODY BIKES. When everyone has the same bike, it makes the whole thing more professional.

“The feeling in the room is electric and you want to keep coming back for more. I can’t wait for next time.”