The Riding High event – organised by Ministry of Sound Fitness and DOSE – promised “5 days, 5 music genres, 14 classes, 75 bikes, 1000+ people”. Monday would be a 90s throwback, complete with backing dancers; Tuesday’s Drum & Bass rides would feature beatboxers on the mic; Wednesday was all about Divas, with the promise of “sass and booty shake in the saddle”; on Thursday, the vibe would switch to Hip Hop and R&B; and then finally things would go Old School garage on the Friday, followed by a garage after-party.

I went for DIVAS, driven in all honesty by my calendar but also quite happy that the vibe might be a little more party-on-a-bike and a little less hardcore. The class strapline: “Bring it Bitch” and the description: “Bring the sass and booty shake with Beyonce, work it from side to side with Ariana and get nasty with the princess of pop. Join Mark Jennings and your favourite divas for a fierce and fabulous, empowering ride. Who runs the world? Girls.”

And so, on a blustery September evening, I made my way to the Ministry of Sound filled with expectation – and with fingers crossed that the experience lived up to the hype.

Having signed up for the earlier class – doors opened at 6.00pm for a 6.15pm ride – I fully expected it to be a little on the quiet side, with most people still stuck at work. But there they were, outside the gates of the Ministry of Sound: a group of mostly 20-somethings, ready and waiting in their gym kit.

We were soon let into the club – shamefully my first time there, in spite of 20 years living in London – and it was already buzzing… screens filled with the DIVAS logo, music setting an upbeat vibe, neon lights guiding you down the corridor and into the bar area. Off to the left, the cycling studio space – head on in when you’re ready and grab yourself a bike.

lights flashing, music pumping, a darkened space filled with excited chatter and friends calling out to each other between bikes.

Once in the studio, it really began to hit home that we were in a nightclub: lights flashing, music pumping, a darkened space filled with excited chatter and friends calling out to each other between bikes. As the dry ice began to drift over my head from the back of the room, it was impossible not to get in the mood as everyone chose their bikes and got settled in.

The one slightly odd moment of the night came when a Geri Halliwell drag queen walked on-stage to introduce the instructors, complete with Union Jack dress. Had she simply hung around the club since Monday’s 90s night, I wondered?

But once the instructors appeared – the highly charismatic Mark and, to each side, a flanking rider – we got right down to business. And high-energy stuff it was, as we immediately knew it would be when we kicked off with Slumdog Millionnaire’s Jai Ho.

Adding to the party vibe were two hula-hooping goddesses – the Majorettes – each on a podium to the side of the stage, clad in skin-tight leopard-print catsuits and swirling multiple neon hula-hoops around for the duration of the 45-minute class.

But let’s get back to the instruction, because wow did Mark have some moves. Luckily, his minimum requirement of us was to stick with the beat for each track – which meant quite a few of us on my row, about halfway back, were content to do as much as we could and then simply look on in awe at the single-time, side-to-side movements as Mark & co hovered above their respective saddles. 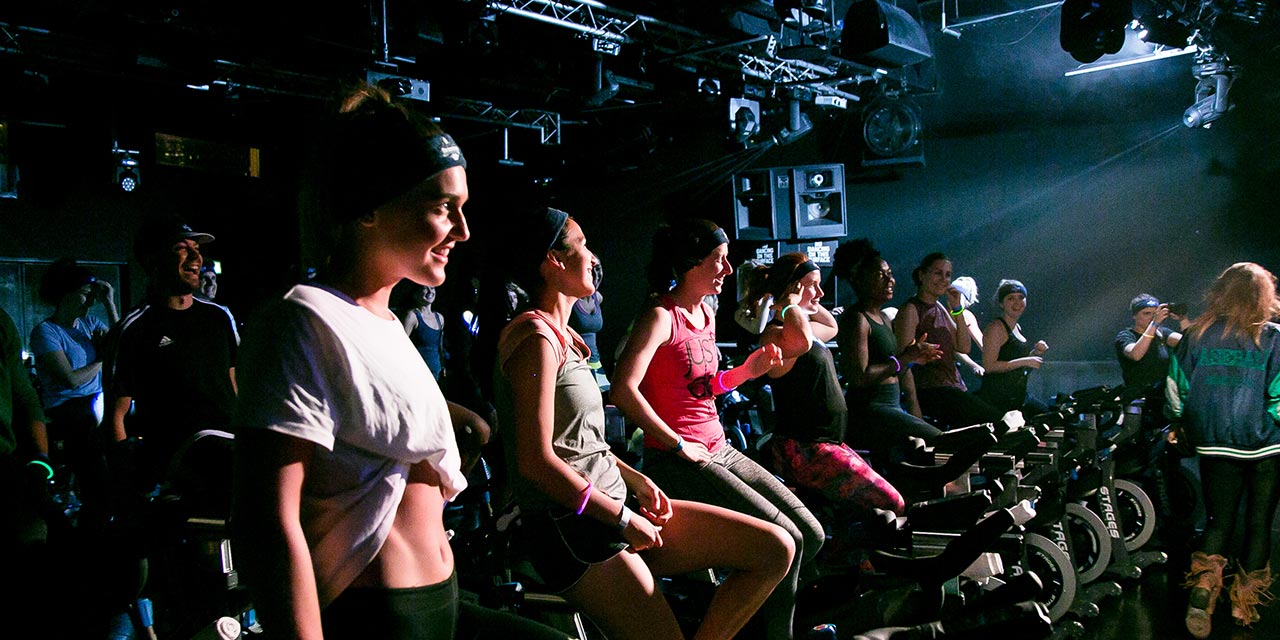 That said, looking around the probably two-thirds full studio – not bad given the early class time and the fact the studio held 75 Stages bikes – it was clear there were quite a few experienced cyclists in the room, all able to keep up with the double-time tap-backs and dance-inspired arm movements. This really was a workout to challenge the pros without alienating the beginners.

But if I thought DIVAS was going to be less hard-core than other classes…. Well, I was wrong. With upbeat track after upbeat track, there was very little time in the saddle – and with pumping music to keep spurring us on, not to mention Mark taking the occasional stroll around the studio to give everyone an extra nudge, neither was there much of a let-up at any point.

So, it was one hell of a workout – but it was also fun. Highly entertaining, great music, great instruction, great environment. Anyone wanting a more technical, data-orientated ride might have been disappointed, but with apologies to the puritans, I’m one of those who will only really do indoor cycling if it’s a party on a bike. And it absolutely was that.

Dragging my poor, tired legs upstairs after the class was a bit of a mission – passing through a bar area that now held enough people to fill almost every one of the 75 bikes in the 7.15pm class – but it was worth it. Because this is where post-workout express facials were on offer, courtesy of skincare specialist Murad. Cooling, hydrating, and just the ticket after a tough, sweaty class.

This event just proved it: millennial is a mindset, not an age… because I loved it.

I did notice that most – albeit not all – of the men from the class had made their way straight out, giving the facials a miss. But to be honest, given the Girl Power tone of the marketing for DIVAS, I was impressed by how many men were there in the first place.

I was also impressed that I wasn’t the oldest there. Not far off, mind you, but to be fair this was an event clearly targeting the millennials. In a way, though, I guess this just proves it: millennial is a mindset, not an age – because I loved it.

And did I get my legal high at Riding High – the energy boost I needed after a long few weeks of work? Hell yes.

Featuring the same sound system as the nightclub itself, and with classes built around seven purpose-built training stations, the workouts are high-powered and results-driven. As the website explains: “Our studio is where we work as a team and sweat our arses off for results… and boy are we serious about results.”

However, the studio also has a fully licensed bar offering protein shakes, beer, wine and cocktails.

It’s this happy balance that the Ministry of Sound Fitness set out to replicate in its week-long Riding High cycling event, held in the main Ministry of Sound nightclub from 17–21 September and organised in partnership with DOSE – “an online magazine for healthy hedonists that promotes feelgood content and experiences”.
Morning and evening classes were on offer each day, all priced at £20 a ticket, and there were some nice added touches to make it more than just a workout. Morning ravers were able to sip on Pukka teas and matcha lattes, while evening guests were offered Heineken 0.0 lagers after class. Skincare specialist Murad also offered post-workout, stress-busting facials using its new Revitalixir Recovery Serum, infused with cannabis extract for a quick pick-me-up.

Shara Tochia, co-founder of DOSE, comments: “We want to redefine hedonism for the modern times, where pleasure seeking, and wellness go hand-in-hand.

“The Riding High parties were designed to get your happy hormones firing, allowing you to get high without the comedown, enjoy a drink without the hangover, all while raving to your favourite tunes in London’s most iconic club.”